This was written for a songwriters-in-the-round, at the Serendipity Cafe in Maynard MA, December 11, 2019. One of the rounds had to be a new song, written for the occasion, based on a prompt selected by the previous month’s audience. This month the prompt was “Claire is leaving!”.

I put together a couple of autumn related songs: my own song “Only Autumn Knows” and the standard “Autumn Leaves“, and tried it out at the PCA Open Mike in Westford on October 27.

Here’s the latest song I’ve been working on, I played it out at the PCA Open Mike in Westford on September 8.

I recently learned that my song Thought I Knew (video, lyrics) won an Honorable Mention in the March/April 2019 American Songwriters Lyric Contest

In January 2018, inspired by a bit of tweeted Presidential Poetry, I composed a verse to the tune of Gilbert and Sullivan‘s I Am the Very Model of a Modern Major-General (from The Pirates of Penzance), and tweeted it. Later, I composed another verse and tweeted that. Jim Infantino[*] was inspired by those and tweeted several additional verses. Some other local songwriters followed suite. Over the next few days I composed a couple of concluding verses.

The following is the complete collection of verses as submitted, with credits. The first part is my preferred set of verses, but feel free to substitute any of the “Alternate Fact Verses” if you like them better.

[*] Jim dubbed the song “The Pirates of Pence’s Pants” – I prefer the more archaic spelling.

This is an older song, but a new video. Performed March 12, 2017 at the PCA Open Mike, in Westford MA, as part of a special tribute evening to local singer/songwriter/promoter/all-around-good-person Ellen Schmidt.

A seasonal song. I wrote this at the tail end of the winter of 2015 (the winter that the Boston area got 108 inches of snow). However, it’s relevant to any winter with snow, so I like to pull it out around February/March. This is a video of a performance at the Club Passim Open Mic on March 9, 2017.

UPDATE 12/15/17: This link describes a simpler method for installing the Google Play store on the lastest Amazon Fire tablets. I’ve tested this on a new Fire HD and it does work. I’m leaving the description below for reference.

Nowadays a variety of applications are available for iOS or Android tablets which are useful for the gigging musician. For example:

But, you may not want to risk taking your expensive iPad or $250 Samsung tablet to a gig and risk having it dropped, or worse having someone walk off with it.

What if there were a good quality tablet which was inexpensive enough that you didn’t have to worry about taking it a gig? It turns out there is: the 7″ Amazon Kindle Fire can be purchased for as little as $49 – less if you buy multiples. And it turns out that the Fire Tablet is quite fast, with an excellent quality display and s responsive touch screen; fully capable of running this sort of app. If you need a larger tablet there are versions with an 8 inch or 10 inch display, still  less than the price of a comparable Samsung.

The only issue with the Fire Tablet, and the reason it is so cheap, is that Amazon wants to lock you into using their apps, and the ones you want are probably not available on the Amazon app store. But, for musicians with a bit of a technical bent, it turns out that it is possible to install the Google Play store on a Fire Tablet, which then allows you to install any app which is available for Android.

Unfortunately it’s not a completely straightforward process, but it can be done in less than an hour, and after you’re done you will have a $50 “disposable” table that you can take to a gig without worries.

The following information is collected from various sites on the web. Much of this is from the “Method 2” described here.

First, you will need to have the following hardware available:

Next, you will need to do the following steps to enable the “ADB Debugger” on the Fire Tablet, which will allow the PC to download new software to the Fire.

Next, run the tool to install Google Play by performing the following steps:

After this, you should find a new “Google Play” app on the main screen of your Fire. Run that, log in with your Google account, and then download whatever apps you need. 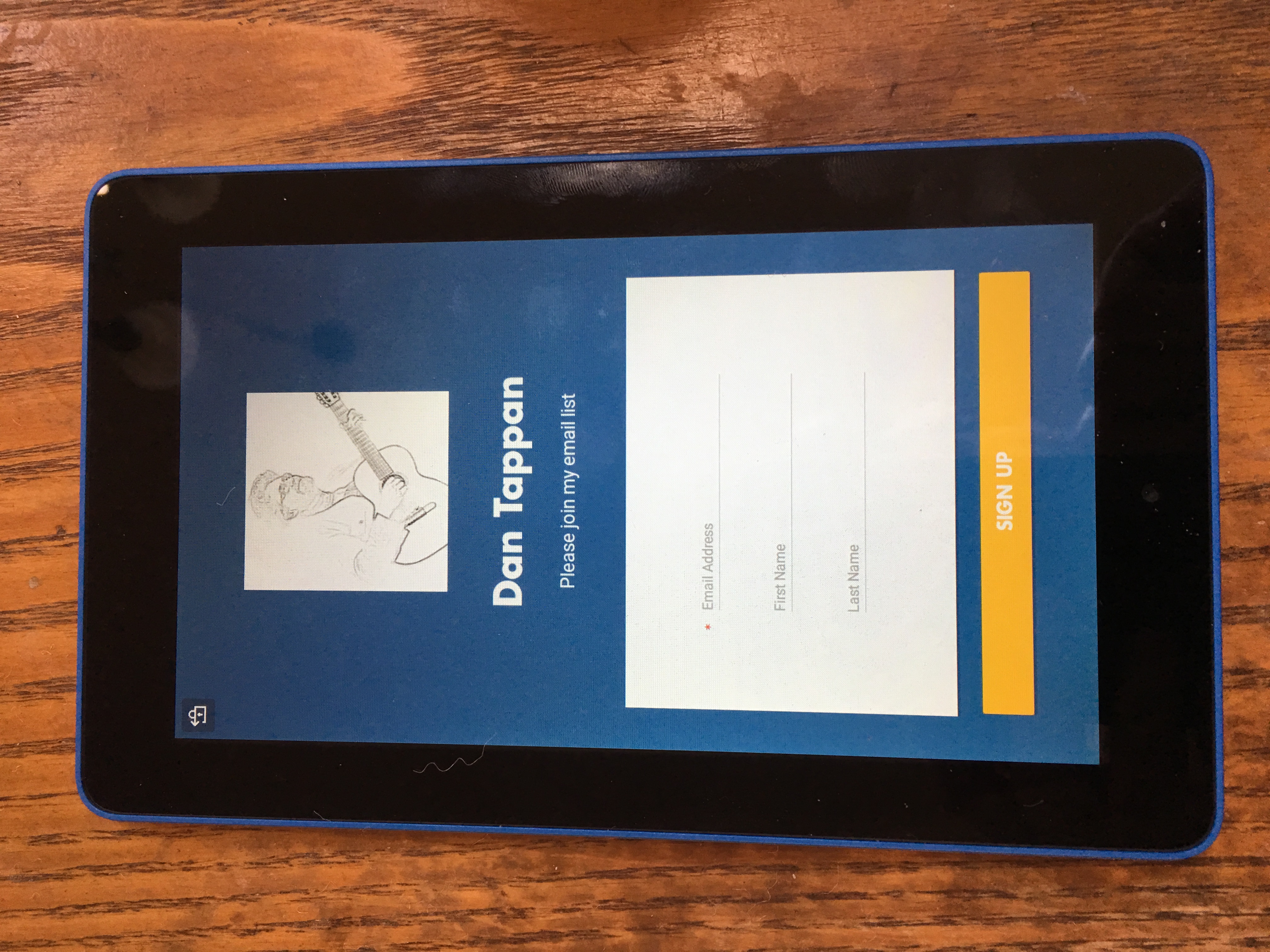 Over President’s Day weekend I attended the 2017 WUMB Winter Acoustic Music Weekend, and had the pleasure of having Jackie Damsky accompany me on violin on one of my songs (Abraham).